President Joe Biden on Tuesday took aim at a Republican plan to increase taxes on Wisconsin families and small businesses and put Medicare, Medicaid, Social Security, and the Affordable Care Act on the chopping block.

Scott’s plan—which Wisconsin Sen. Ron Johnson praised as a “positive thing”—would raise taxes on tens of millions of Americans and end every federal law, including those governing Medicare, Medicaid, and Social Security, unless Congress reauthorizes them every five years.

This could create an opening for Republicans—who have long sought to undermine the programs—to ultimately kill them. 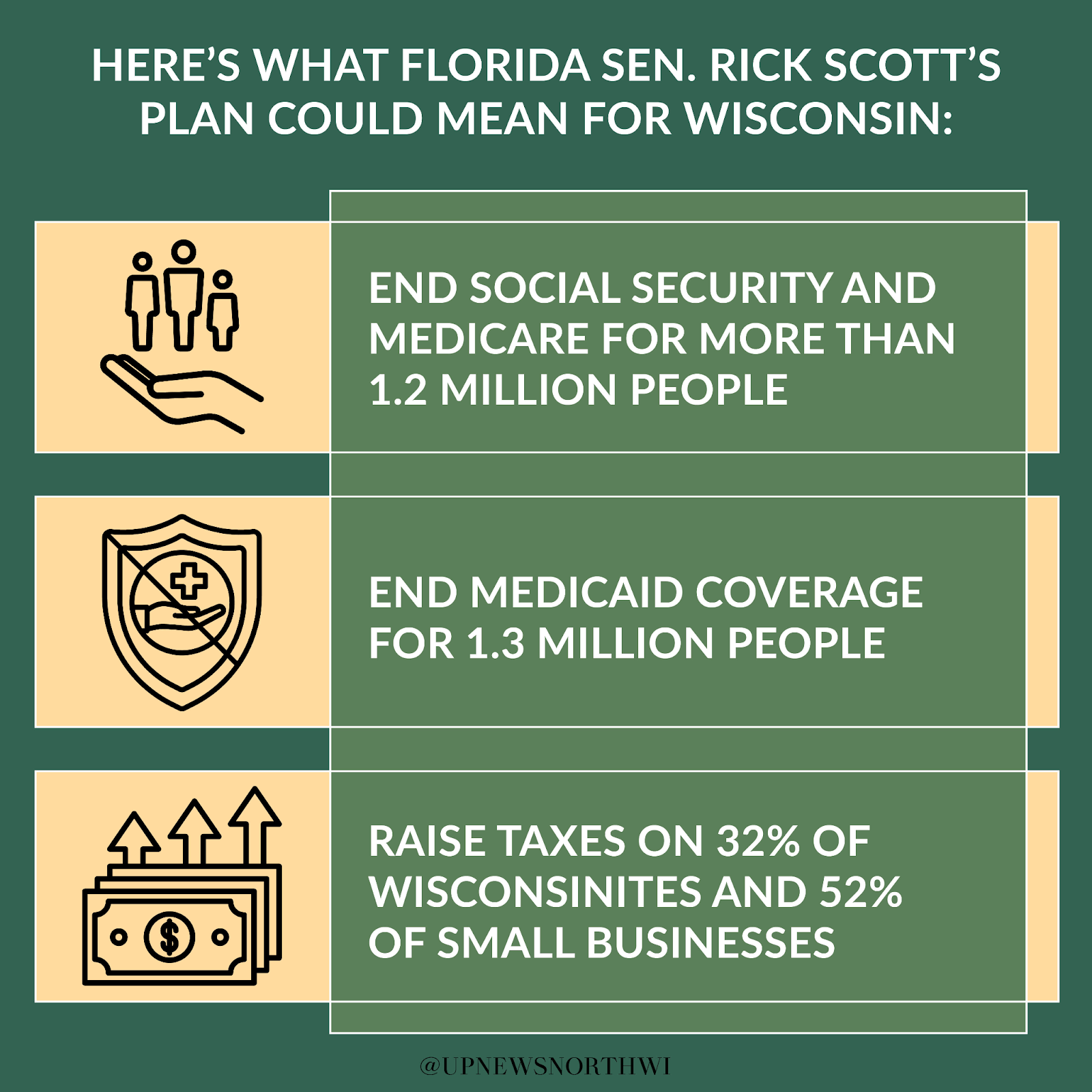 If Scott’s plan—which is overwhelmingly unpopular with voters—were to become law, it could:

“Imagine all the bargaining that’s going to take place,” Biden said. “How well are we going to sleep at night knowing that every five years…We’re going to have to vote whether you’ll have Social Security, Medicare, Medicaid and what amounts you’ll have in each of those programs.”

Taxing The Rich vs. Tax Cuts For The Rich

Biden hammered Republicans for their effort to “threaten sacred programs that Americans count on,” while giving corporations and billionaires massive tax breaks, like they did with their 2017 tax law, which disproportionately benefited the uber-rich—including Sens. Johnson and Scott, who are worth a combined $300 million—while giving little relief to working- and middle-class Wisconsin residents.

“Fifty-five of the largest corporations paid net zero in federal taxes in 2020 on $40 [billion] dollars profit,” in the aftermath of the Republican tax cut, Biden said. “That just isn’t right.”

Among those 55 companies is Brookfield-based FiServ, which paid $0 in taxes and actually received a $25 million tax rebate.

On the individual level, the top 1% of earners in Wisconsin—who earned an average $1.46 million in 2020—received nearly $40,000 in tax breaks because of the 2017 Republican tax cuts. Those who earned an average of $55,000, however, only received tax cuts of $790, while the poorest 40% of Wisconsinites saw less than $400 in tax savings, according to an analysis from ITEP.

Rather than address rising inflation and growing financial inequality, Biden accused Scott and his fellow Republicans of trying to make it worse.

“Congressional Republicans have proposed raising taxes on teachers and firefighters,” Biden said. “[They] are so deeply committed to protecting big corporations and CEOs that they’d rather see taxes on working American families and try to depress their wages to take on inflation.”

These big corporations—many of whom are recording record profits by exploiting inflation to jack up prices—don’t need any further help, Biden said. Instead, he said, they should be taxed.

While Republicans jerry-rigged the tax system to benefit corporations, Biden said he wants to raise taxes on big companies via his proposed minimum tax on corporations and use those funds to reduce the deficit and fund programs that lower costs for working families.

Biden’s Plan to Take on Inflation

During his speech, Biden directly addressed the American people, acknowledged that inflation is the most serious economic issue facing the country, and promised to do everything he could to address it.

“I know you’ve got to be frustrated. I know. I can taste it. Frustrated by high prices and gridlock in Congress—the time it takes to get anything done,” Biden said. “Believe me, I understand the frustration.”

The president touted his “common sense” plans to address inflation, which include releasing oil from the national reserves, providing tax credits to transition to clean energy, getting more truckers on the job, and reducing healthcare costs by limiting insulin copay costs and requiring Medicare to negotiate drug prices.

None of these plans appear likely to become law, however, given staunch Republican opposition in the 50-50 Senate and reluctance among a handful of Senate Democrats to reform the filibuster, a procedural tool that effectively means that no bill can pass without 60 votes.

Biden also said his administration was working to strengthen supply chains and increase competition and reduce consolidation within industries, including the meat-packing industry.

Ultimately, Biden sought to paint a contrast between he and his fellow Democrats and the “ultra-MAGA” Republican Party, and leave it to the voters to decide.

“I urge all Americans to think about the path I’ve laid forward,” Biden said. “Which path is right for you, and for your family, and quite frankly, for America?”

Keya Vakil Keya is a reporter at COURIER, where he covers everything from healthcare to climate change. Prior to joining Courier Newsroom, Keya worked as a researcher in the film industry and dabbled in the political world.

travel Never Been to Wisconsin? Here Are Places to Visit Based on the Season.

Get exclusive Wisconsin stories & news right in your inbox